I have a lot of pics on my cell phone that I've always wanted to post on here, so I'm going to make a point of trying to do that!

This is Shadow about a month after we got her- she was only about 11 months old and still so little!! (I wish we could (or I should say, we NEED to) get her back down to this weight, because now she's chunky!) She had gone into heat before we could get her in to be spayed, hence the diaper. The floor was also being remodeled, so this was definately a stressful few weeks! Teeny Shadow! We were so happy at this time- even though it was stressful- she was like a little angel that came to our house. We couldn't have been more lucky to end up with her. 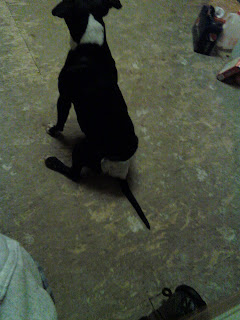 She would wiggle her butt and wag her tail so hard that the diaper would rip! 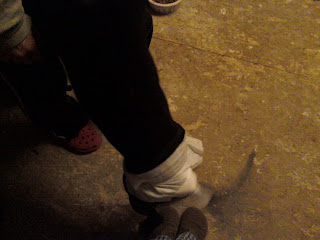 And this was Shadow last August bright and early on her way to be spayed. It looks like she knew it was going to turn out aweful (read back to August 2009 posts if you missed what happened!). 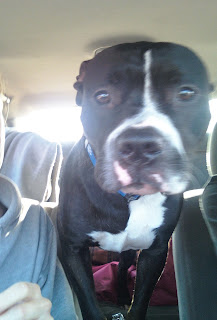 PoochesForPeace
I'm Anna. This blog started as a way to share the many dogs I have in my life in one way or another, and has evolved from there. This blog is mainly for the two most important dogs in my life, Spuds and Shadow, and for breed equality. It is also for me to share all of the other most important aspects of my life- LIFE!, art, healthy cooking, and any other daily randomness that comes along. I hope you enjoy this adventure with me!

"I looked at all the caged animals in the shelter...the cast-offs of human society. I saw in their eyes love and hope, fear and dread,sadness and betrayal. And I was angry. "God," I said, "this is terrible! Why don't you do something?" God was silent for a moment and then He spoke softly. I have done something," He replied. "I created you." ~The Animals' Savior Copyright JimWillis 1999